Zombie Escape! is a map exploration game  for 2-4 players where you fight zombies and collect resources to be the first to complete your zombie survival kit. A full game takes about 30-60 minutes.

It began as a class project between Pin Chen and I.  The assignment was to make an analog game using mechanics from Catan and Betrayal at the House on the Hill. The mechanics that have manifested in our game, Zombie Escape!, are the random map generation based on player discovery from Betrayal and hexagonal tiles and resource generation from dice rolls from Catan.

Other mechanics that we tried but failed are:
A huge scorecard to fill out, not unlike Yahtzee! (Ended up with just 4 core win requirements, nixed the points system)
Using barricade cards to create literal barricades on the map
Zombies also exploring and opening up new tiles

Each player gets 2 actions per turn:
>Move 1 tile
>Steal from another player on your tile
>Attack a zombie on your tile
>Heal a wound or revive a survivor

At the end of each turn, players will:

During resource gain phase, the player rolls the 2 special d6 and if a survivor is on a tile that matches the total number of the 2 dice, the player (and only the player that is rolling the dice) gains the matching resources. Then a counter is placed to indicate the new total amount of resources left on the tile. Once it is depleted, the tile is turned over and no more resources may be gained from it.
If a player lands on a special named tile (like the Grocery Store), the resource gain is 2 times per roll rather than the standard 1.
Zombies are spawned upon immediately finding the zombie face icon on a tile, and they must be fought immediately(multiple icons means multiple zombies). This does not spend and action. If a player defeats a zombie, that player gains a star card. If a player loses, she gains a wound card and must discard half (rounded up) resource cards. (2 wound cards and a survivor must be removed from play) If there is a tie, the player may use her action to move to another tile or attack the zombie again. A single weapon may be discarded before battle to add +1 to your total attack roll.
Stealing from a player works much like zombie fighting-- it's 1v1 on the special dice, but the defending player may discard a barricade to give a +1 to his roll. Damage is not done no matter what the dice say. Th attacker may steal a random card from the player's stock if he rolled higher.
When the player rolls for zombie movement at the end of his turn, he will roll a regular d6 one time and all zombies will move one space in the direction denoted by the 6 numbers along the outside edge on each tile. The only exception is if there are more than 1 zombies on a tile-- they must be separated by rolling for them individually. If there is no tile where the zombie would go, then it does not move. Do not roll more than once for a single zombie. They also may not enter the Start tile.
On the Zombie Nest tiles, zombies are spawned upon finding, and then a new zombie is spawned upon ANYONE rolling doubles.
Resources may be spent at any time to purchase an item. The first person to make one of each item wins!

The game is best played with 4 players, but suitable for up to 6.
The materials used in the prototype were:
3 of each colored cube (borrowed from Pandemic) to represent the players' survivors
2 special d6 from Betrayal at the house on the Hill (each die has 0-2 pips) for resource generation and fighting/stealing
A regular d6 for zombie movement
12 zombie minifigs (borrowed from Zombicide), but I encourage you to use as many as you want-- it's basically a difficulty scale.

~Resources may be spent at any time during your turn and doesn’t cost an action
~Star cards may be used at any time unless specified
~Zombies must be fought at the beginning of your if one is on your tile (this does NOT spend an action)
~Resources cannot be gained be gained if a zombie is on your tile
~Resources may be traded
~Zombies must be fought upon encountering them on a new tile (this does NOT spend an action)
~Zombie Attack: 1 v. 1 die, win = zombie death and +1 Star Card; losing = 1 wound card and drop half your hand inventory. A weapon may be used to add +1 to dice roll before battle
~Stealing: 1v1 die - the attacker may steal 1 random resource from a player sharing a tile with you if the attacker rolls higher. The defender may add +1 by discarding a barricade
~Zombies move one tile at a time based on the die rolled on the d6 every turn.
~Opposing players may occupy the same tile 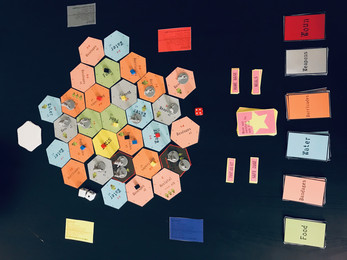 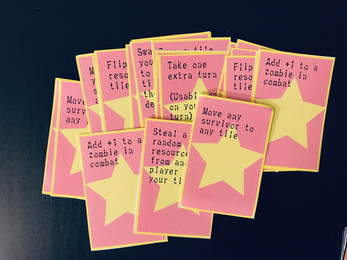 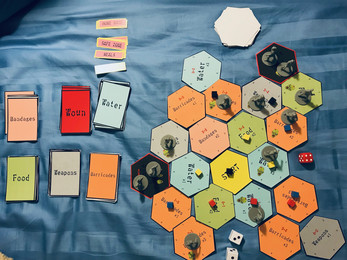 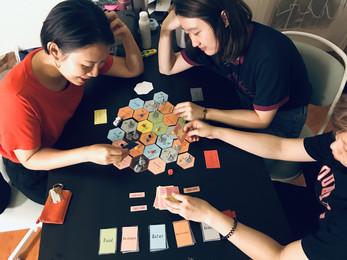 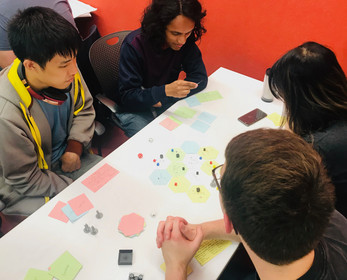 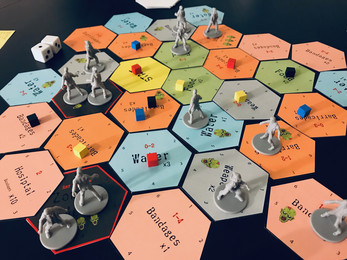